SAVE up to 20% Off  Tickets for We Will Rock You – The Musical.  Plus Additional Savings on Service Charges and No Booking Fee! Contact Us Directly.

We Will Rock You – The Musical

WE WILL ROCK YOU is a quirky, eccentric and heartfelt story of outsiders. It is also a creative cautionary tale for the cyberage.

With the Oscar-winning film, Bohemian Rhapsody, the music of Queen is more popular than ever. WE WILL ROCK YOU follows two revolutionaries, Galileo and Scaramouche, on a quest to save rock n’ roll in a post-apocalyptic world where there are no musical instruments and rock n’ roll has died.

Galileo and Scaramouche will join a small group of societal outcasts, the Bohemians, as they fight to take back the iPlanet from the all-powerful Globalsoft, led by the Killer Queen. They will fight for freedom, individuality and the rebirth of rock n roll.

Since 2002 over 16 million theatregoers in 19 countries have been thrilled by this awe-inspiring production which is based on the songs of Queen with a book by Ben Elton (The Young Ones, Blackadder, Popcorn). Elton fashioned this futuristic story around more than 24 of Queen’s biggest hit songs including: We Are the Champions, Radio Ga Ga, I Want To Break Free, Somebody To Love, Killer Queen, Don’t Stop Me Now, Under Pressure, Bohemian Rhapsody, Another One Bites The Dust and, of course, We Will Rock You.

WE WILL ROCK YOU reflects the scale and spectacle that marked Queen’s live performances and earned the band its pinnacle position in rock history. With Queen’s Brian May and Roger Taylor as music supervisors and “a band without parallel in the theatre” behind the cast, the audience can expect WE WILL ROCK YOU to rock as fiercely as the best of Queen’s concerts.

“A concert is not a live rendition of our album. It’s a theatrical event.” – Freddie Mercury

“The show is live, dangerous and more than anything else: it rocks!” Brian May, Queen

*The ticket prices include all applicable fees. There is no additional “Booking Fee” or additional “Service Charge” for Groups 8 +. Dynamic pricing is in effect with applicable fees for online purchases. Book early. Any questions contact us.

Looking for a great restaurant, parking or a preferred hotel? Please ask and enjoy our FirstClass services even more.

Share our link and get your friends, family and colleagues to join the free FirstClass VIP Club and learn how to become part of the Preferred Partners Perks Program to receive exclusive event announcements, ticket offers and contest details. Follow us on social media Instagram, Facebook, Twitter and YouTube to be entered into contests for event tickets and merchandize.

Contact FirstClass Group Tickets for more information. Thank you for your FirstClass business.

Save on FirstClass Group Tickets for We Will Rock You – The Musical Toronto, Meridian Hall (formerly Sony Centre) Two Shows Feb 7-8, 2020 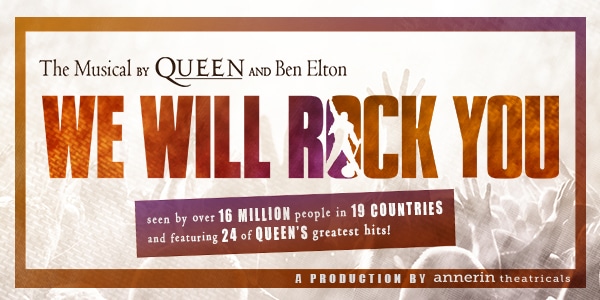